Thanks to the efforts of Carl Sagan, the following photo was taken by the Voyager spacecraft in 1990. It shows what our planet looks like from 3.7 billion miles away. This is the farthest distance the earth has ever been photographed. 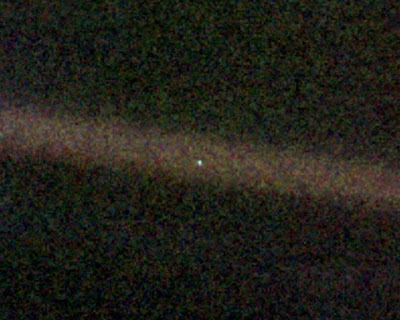 From this vantage point, there's no way to tell the planet in the picture harbors intelligent life. It's just another point of light, a pale blue dot. The picture shows just how small and insignificant we are in the cosmos.

Carl Sagan's wife, Ann Druyan, suggested a very interesting experiment based on the photo. It reveals how ridiculous our religious beliefs look to an alien civilization:

"Look back again at the pale blue dot. Take a good long look at it. Stare at the dot for any length of time and then try to convince yourself that God created the whole Universe for one of the 10 million or so species of life that inhabit that speck of dust.

Now take it a step further: Imagine that everything was made just for a single shade of that species or gender, or ethnic or religious subdivision. If this doesn't strike you as unlikely, pick another dot. Imagine it to be inhabited by a different form of intelligent life. They, too, cherish the notion of a God who has created everything for their benefit. How seriously do you take their claim?

Carl Sagan, in his book "Pale Blue Dot", goes on to say:

"You might imagine an uncharitable extraterrestrial observer looking down on our species... - with us excitedly chattering, "The Universe is created for us! We're at the center! Everything pays homage to us!" -and concluding that our pretensions are amusing, our aspirations pathetic, that this must be the planet of the idiots."

It's hard to disagree with him. All the heartache that's been caused over religion on this tiny little speck of dust has been so wasteful. If people could only open their eyes and see where we truly stand in the cosmos, the world would be a much better place.

Here's a great video narrated by Carl Sagan regarding the Pale Blue Dot: